Before you start verify that you have a supported LED type. Lightkraken supports the following LED strip types:

Before wiring up your LED strip make sure you select the right output voltage on the Lightkraken board. Look at the above table for the right voltage.

Lightkraken has two output ports which allows you to attach two separate serial LED strips. If you happen to have a device set up to output analog RGB, see the “Analog RGB” section below as it gets a little bit more complicated.

Terminal A is on the left, Terminal B on the right: 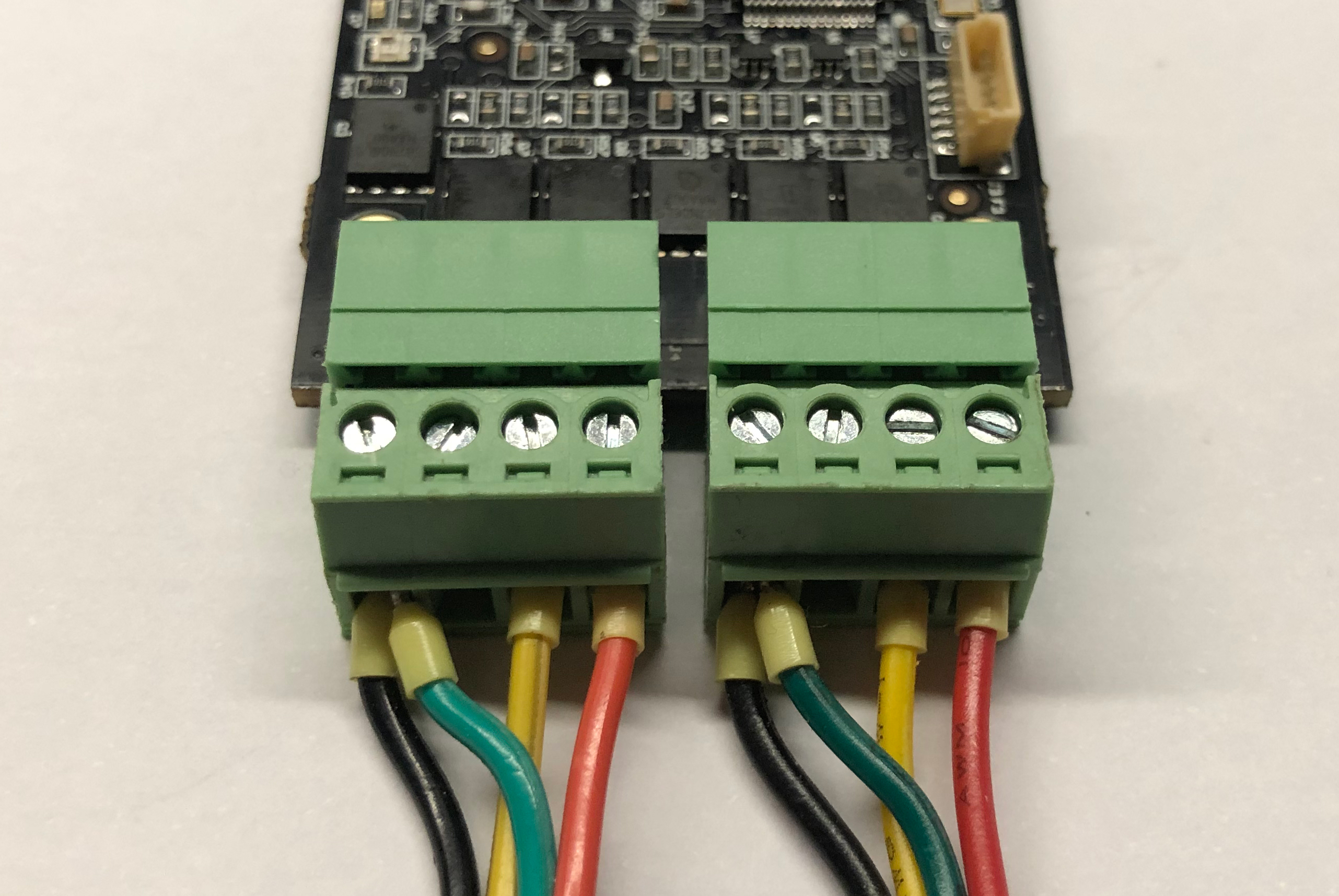 In the example above, the BLACK wire is Ground/GND, the YELLOW wire is the DATA/DOUT line and the RED wire is POWER (5, 12 or 24V). The configuration above applies to all strips using a 1-Wire protocol.

If you have a secondary backup data line like for WS2815 type LEDs connect it to ground as seen in the picture. 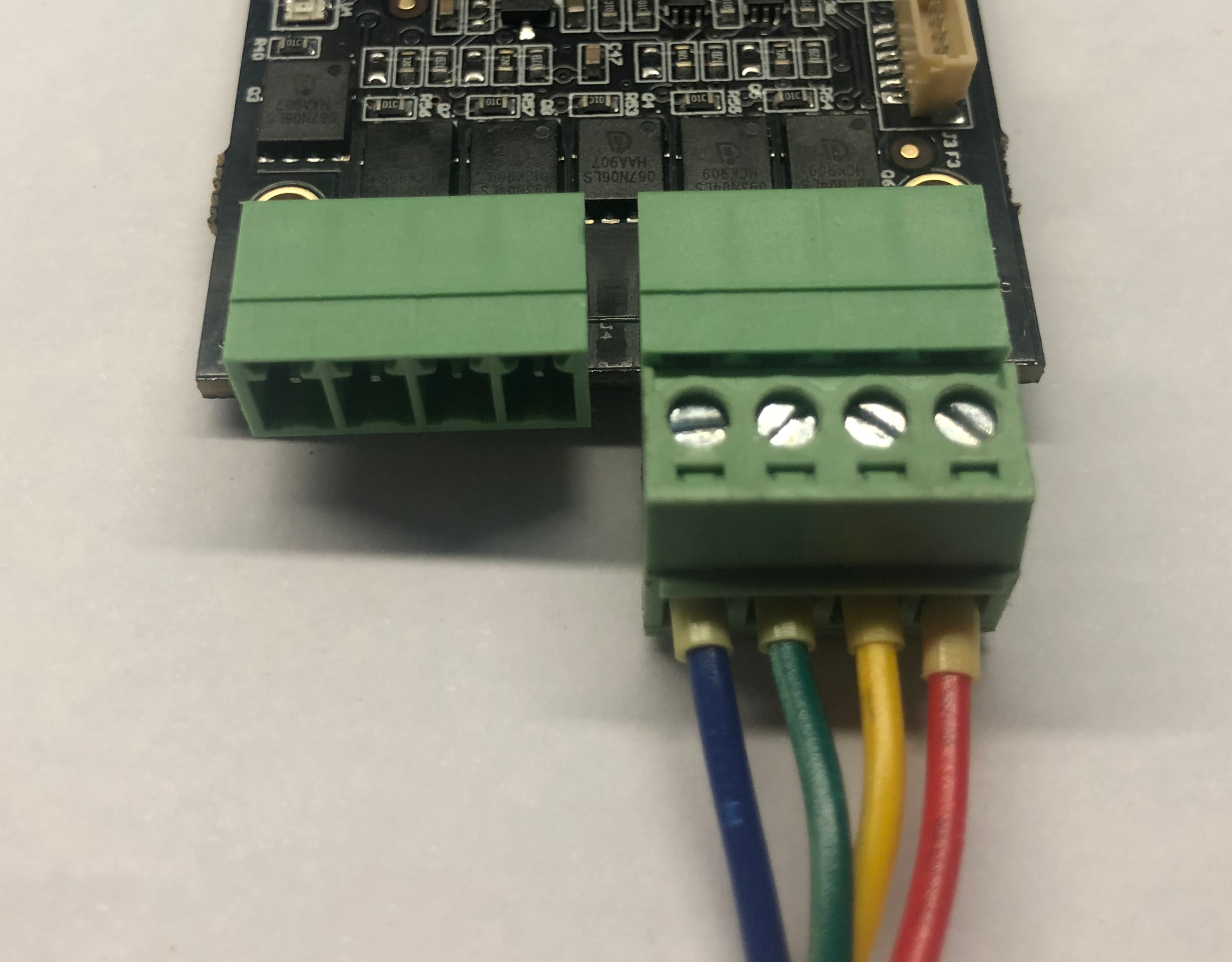 In the example above, the BLACK wire is Ground/GND, the GREEN wire is the CLOCK line, YELLOW wire is the DATA line and the RED wire is POWER (5, 12 or 24V). The configuration above applies to all strips using a serial protocol.

Now that we have connected our LED strip(s) we can plug in our RJ45 cable into the device and PoE switch to power it up. If everything goes well you should see three green LEDs:

The LEDs of your strip(s) will be black/off by default.

By default the device will try to get an IP address using DHCP. If the device successfully acquires an IP address you will notice that the middle green LED will start blinking. If your firewall/router handles host names in a standard fashion you can now use the sticker on the back to find the name of the device on your network: 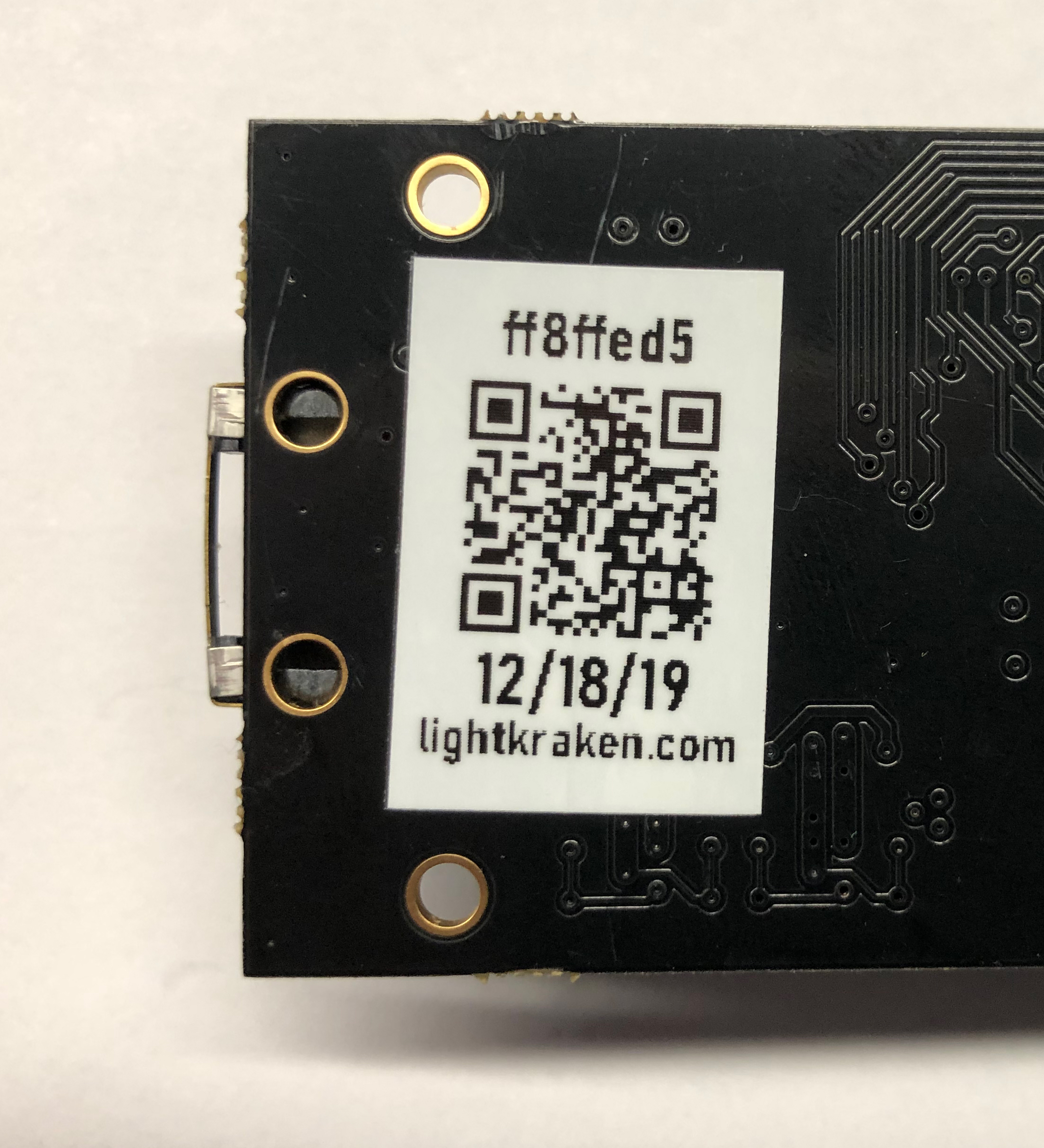 If your mobile device is connected to your local network simply point it to the QR code and it will open the web configuration page of the device. The URL will be in this form:

Alternatively check your DHCP leases on your router, example:

As a third option use a tool like ArtNetominator which can enumerate ArtNet devices.

Note that the MAC address will always be in this form:

The two first bytes are always “1e:d5”. The remaining 4 bytes are the same as the hex code on the sticker. These MAC addresses are locally administered addresses (LAA) and should not be made reachable on the public internet.

When DHCP is not available

If you plug the device into a switch which is not connected to a router with DHCP support, the DHCP detection on the device will time out after 30 seconds. After the timeout the device will revert to a default IPv4 configuration:

Note: Using static IPs is generally the recommend way of doing large and live installations, especially when power outages are expected. One common problem with DHCP is that if dozens or more devices simultaneously ask for a DHCP based address when power goes on, the request packets tend to get lost as the router drops them. Or more commonly the router takes more than 30 seconds to boot which means DHCP requests went nowhere. The result is that some devices will never acquire an IP address.

The firmware can be updated over the network. To do so you must set the device into boot loader mode. There are two ways of doing this:

While the device is in boot loader mode, the right most LED should be flashing red.

The device now either gets an IP address through DHCP or sets a fixed IP address after a 30 second timeout as specified above. The static IP setting is not supported currently.

Open the boot loader interface by entering the IP address of your device in a web browser: 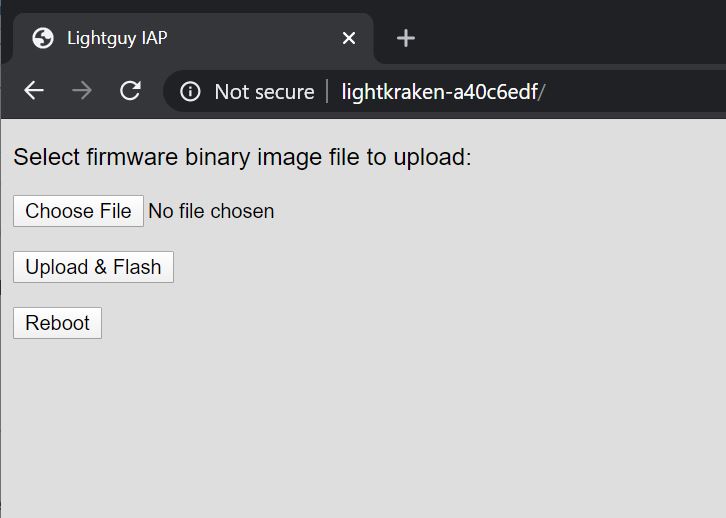 Upload the firmware using the web interface. The firmware file name should be “lightkraken_bootloaded.bin”. Click “Upload & Flash” which will start the firmware update. The right most LED will go through various color changes. If the LED continues to blink red after flashing the firmware, you most likely did not upload the correct file.

Resetting the device to factory default

If you need to reset the configuration of the device hold the user button for about 10 seconds and then let go. All settings will revert to factory defaults and the device will reboot. This is mostly useful if you for some reason misconfigured the static IP settings and the device is not reachable anymore.

Except where otherwise noted, content on this wiki is licensed under the following license: CC Attribution-Share Alike 4.0 International